🇸🇾 🇺🇸 Amal Kassir 🧕 | The Muslim on the Airplane | TEDxMileHighWomen 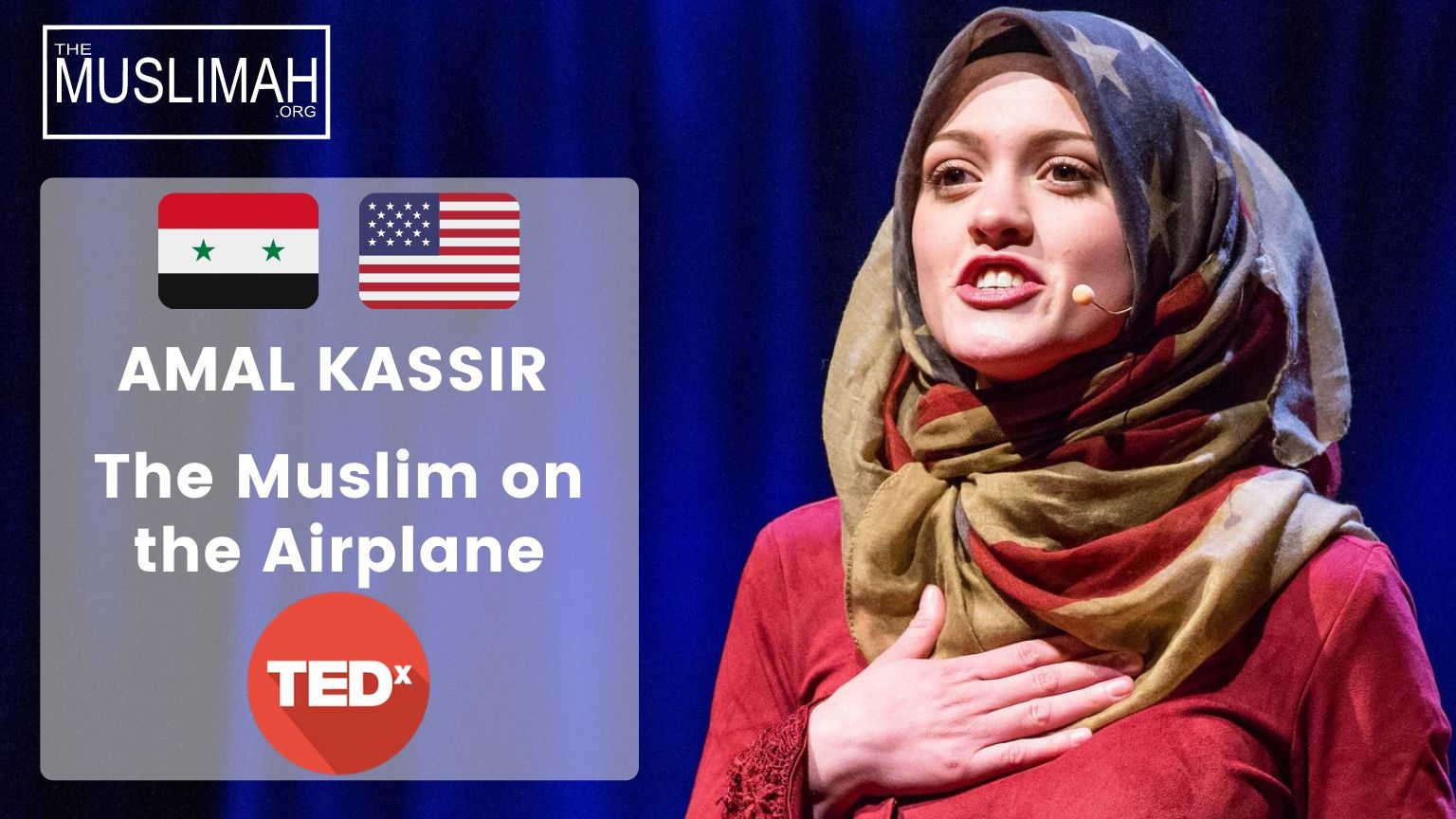 Watching the news, it seems like ethnic divides are ever-deepening. But how can we solve these complicated problems when each side lives in fear of the other?

The answer is simple, argues Syrian-American poet Amal Kassir – it starts with, “What’s your name?”

Amal, a young Muslim-American and native Coloradan found a platform for her voice growing up working in her family’s restaurant. She has been writing poetry since she was a child and has performed in eight countries, sharing her verse everywhere from youth prisons to orphanages to refugee camps. This talk was given at a TEDx event using the TED conference format but independently organized by a local community.

Here is the full transcript of Syrian-American international poet Amal Kassir’s TEDx Talk presentation: The Muslim on the Airplane at TEDxMileHighWomen conference.

Whenever I travel, I carry a little metal box of Altoids mints because after a four-hour 7 AM flight, everyone has bad breath, so almost anyone is willing to take the mint from the Muslim on the airplane.

And I know I’ve been successful when my neighbor turns and asks, “So, what’s your name?”

My name is Amal. It means ‘hope’ in Arabic. Most days my name is waitress at my family’s Damascus restaurant, full-time university student and then some, pre-law, world traveler, 11 countries. My name is I’ve performed poetry in eight of those countries.

But at the airport, my name is random search. And on the street, it’s terrorist, sand nigger, raghead, oppressed, and on the news, it’s ISIS, jihadi, suspect, radical. My name is, “Could your Muslim neighbor be an extremist?”

My mama, who wears the hijab, the Islamic headdress, is often referred to as “Go back to your country,” but she’s from Iowa! And her nickname is Lisa Pizza. And it does not take more than a couple questions to figure out that her country is the Council Bluffs cornfields.

But, how would someone know this without asking? They say the shortest distance between two people is a story. Well, I elaborate on that to say that the greatest distance you can travel in the shortest amount of time, is by asking someone their name. The way we name ourselves is a reflection of who we are, our declarations, family histories, the things we believe, the morals we abide by, our homes, cultures, transformations. Like a Mohammed turned Mo, or a Lisa Pizza turned Iman. And how we name others, and how, if, we allow others to name themselves is a reflection of our own declarations, of our courage, and our fear.

The malleability of a person’s story must be self-determined, coming from the lips of the storyteller, not the anchorman, not the megaphone, not even the scarf on her head or the melanin in his skin, because no one can speak the names of billions in one breath, unless it’s in prayer, and oftentimes when we generalize, it isn’t because we’re praying. And when we don’t ask someone their name, we’re not asking for their story.

In the world of mass media and rampant misinformation, it is hard for anyone, including myself, to deconstruct all these terrifying stories that we hear. Sometimes, instead of isolating them, individualizing them, we tend to paint a group of people with a broad brush, until suddenly, everyone with a hijab on is a raghead that needs liberating, or everyone with white skin is a racist cracker, or everyone with black skin is a fatherless nigger, or everybody who looks like my father is going to blow up the airplane, or if the killer had a light complexion, he’s just a mentally fragile lone wolf.

And we come to this point where we feel like we don’t even need to ask people their names because we already gave it to them. In Europe right now, a monumental name change is taking place that has completely transformed a humanitarian responsibility. Countries are deporting refugees, but when you watch news coverage, these refugees are being referred to as migrants.

Because let’s face it, deporting migrants sounds way more reasonable than deporting individuals who have been forced to flee their country because of persecution, war, and violence — the United Nations definition of refugee. And in naming these people this way, we’ve attributed to them a choice instead of a circumstance, some economic gain instead of a desperation to flee a war zone. These little ones are refugees, not migrants.

I took this photo last year at a refugee camp on the Syrian-Turkish border, and contrary to popular belief, they aren’t poisons. They’re not here to steal our democracy or to take over our neighborhoods. They’re people, families who wish that they could go home but have had to make that home somewhere else.

And we’ve come to this point, where the word ‘migrant’ essentially means piles of brown, foreign-speaking people, and we end up forgetting that there was a point where some people would’ve considered those who looked like this to be migrants as well. Right, though?

And it is in this forgetfulness that we assume, monopolize on people’s stories, attribute their race, social class, religions, clothing to the names that we chose for them. Terrorism is a fine modern-day example, unfortunately. In the past few years, so much violence has just spread across our country, but when you watch the news, there’s always a specification as to whether or not terrorism was involved, which I think we all know means the killer looked like this. Which — He’s a babe — which must mean — which must mean that the killer, of course, pledges his allegiance to this. [ISIS] Right?

But correct me if I’m wrong, news coverage does in fact tend to be a little different when the terrorist looks like this. [Robert Dear, Planned Parenthood Shooter]

And it ultimately has us forgetting that terrorism, by definition of terrorism, has always come in all shapes [Ku Klux Klan] and colors. [Timothy McVeigh, Oklahoma City Bomber]

And what happens when we confine certain names with certain depictions, wrongfully excluding some and including others, we end up caging masses of people under a name that says ‘dangerous,’ even if they’re nowhere near it. Like when we say ‘thug’ instead of 17-year-old black child. [Trayvon Martin] When we say ‘alien’ instead of ‘immigrant.’ When we say ‘lazy poor people’ instead of ‘unequal wealth distribution.’ When we say ‘bomb’ instead of ‘clock.’ [Ahmed Mohammad, clock inventor]

This man’s name is Craig Hicks. He’s often referred to as a parking dispute, but his real name is a man who shot and killed three Americans in their homes, in their heads, execution style because they were Muslim. His name is hate crime. Their names are Deah, Yusor, and Razan, a 23 year old, 21, and 19. Deah and Yusor were just named husband and wife, newlyweds, and the three were known by their loved ones as sons and daughters, brothers, sisters, students, activists, Instagrammers, tax payers, Americans. But now, their names are too young to have been taken, their names are rest in peace, Allah Yerhamo.

Hicks did not ask them their name. He assigned it to them when he assigned them each a bullet, named them a threat to his America, and as a result, took their lives. This is a photo on Deah and Yusor’s wedding day. It’s so beautiful. They were killed before they could even see this.

Studies show that during breaking news coverage, the first story is the one that sticks, even if it isn’t true. Like during the Paris attacks, when there was talk that refugees were dangerous because they found a passport, only to later confirm that there were no Syrians or refugees involved. But when we have such a huge habit of misnaming people, it’s easy to overlook these kinds of mistakes. And this is exemplary of what happens in a culture of fear.

In a society that doesn’t ask one another their names, you end up with the mouth of an anchorman or the mouth of a gun doing all the talking. On September 11, 2001, I attended a private K-8 Islamic school, and within the first hours of the tragedy, my school received two bomb threats. The word ‘terrorist’ was not on my spelling list, but all of us kids picked it up pretty soon after. And in naming us terrorists amidst this mass tragedy that affected us as Americans too, in the words of Dalia Mogahed, we were not just mourners, but we were suspects as well.

But, a few months ago, me and my very handsome, white-boy-looking brother named Usama were at the museum buying planetarium tickets, and an elderly white man walked up to me and said, “I’m sorry about everything you must be going through right now. I want you to know that not all Americans believe what these buffoons are saying.” Yeah, he used the word ‘buffoons!’ And he said, “I want you to know that we stand by you.”

Now, had I not been wearing a little piece of my identity on my head, he wouldn’t have known to tell me this. And even though he didn’t ask me what my name was, he instead told me his. I have learned from experience that when someone really wants to know, they will be willing to cross that threshold of fear and find out that my name means hope. And then, they’ll have the courage to ask the much more important questions that probably only I can answer, like, “What’s that thing on your head? Were you forced to wear it? Are all Muslims really violent people? Does the Quran really say to kill all of us? Can you please tell me what’s up with ISIS?” And these questions, though seemingly uncomfortable, are how I know that I have been humanized, and are how the courageously curious know that really, I’m only as scary as the silence fear festers in.

Upon meeting someone new, we ask their names. We do not assign it to them. And with that name, we are given ancestry, bloodlines and dialects, books and poems, perspectives, wars, struggles, and survival stories. “What’s your name?” is such a short distance to cross, but when you ask me, oh, buddy! I will take you from Kuala Lumpur to Barcelona to Beirut. We’re going to go to Damascus, to Sydney, to Trinidad and Tobago. I will show you Mecca, my closet with 70-plus international scarves, the graves of my 31 family members who’ve been killed in Syria, the coffee shop that I hang out at and do my homework. But we must have the courage to claim our curiosity, to go beyond anything we ever knew, anything we ever feared.

But it takes two: the elephant who offers the mint and the one who takes it.

Newsletter Signup
In this article:Amal Kassir, Muslimah, TEDx, TEDx Talks
Up Next:

What is Easter​ to Muslims? Is Jesus a Prophet in Islam☪️ ?