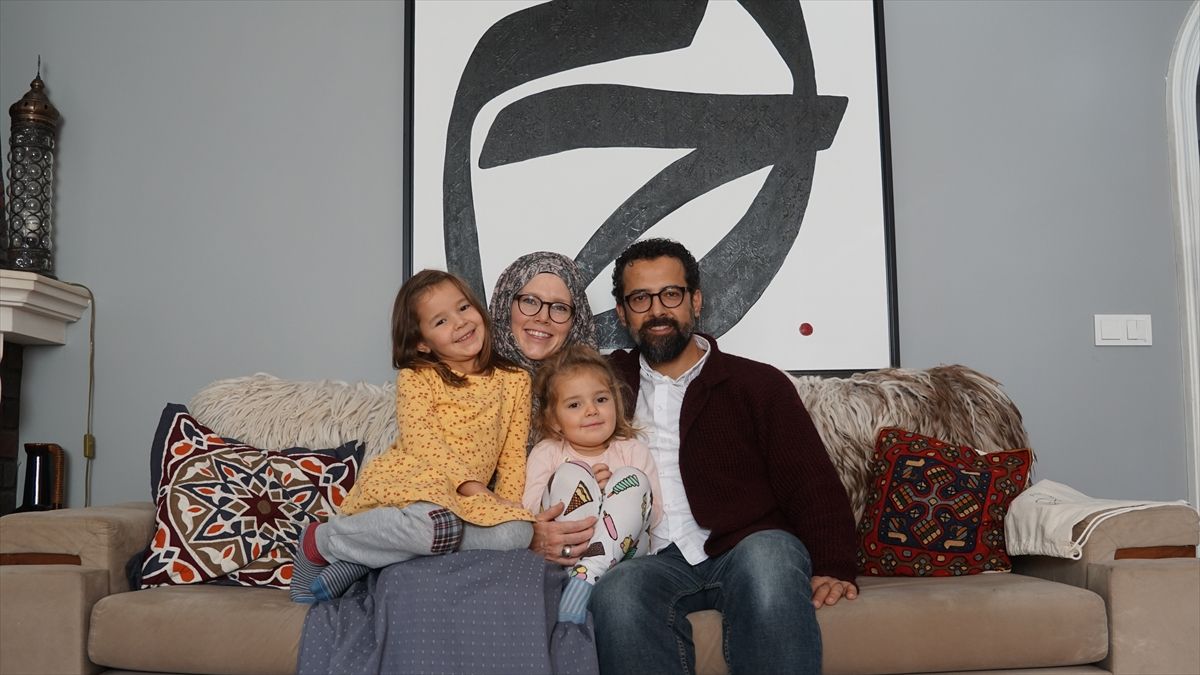 Jenny Molendyk Divleli, a Canadian sign language English teacher, who converted to Islam in 2006 has been simplifying religion for children by making social media posts that she prepares with her five kids.

Settled in Istanbul for over the past nine years, where she continues to teach the English language, she is engaged in making educational and informative material for children, touching general issues, and introducing Islam and the life of Prophet Muhammad in Turkish and English language social media posts.

Speaking to Anadolu Agency, Molendyk said she was raised in a conservative Christian family as the second child of a police officer and a nurse. During her graduating in Linguistics and Interpreting American Sign Language while searching for answers to various aspects of life, she began debating with Muslims.

“After long research, I found answers and on May 14, 2006, I converted to Islam. This was the biggest decision of my life,” she said.

Although at first her instructors and father opposed and tried to convince her to review her decision, she, however, remained steadfast. During this period, she met Sami Divleli and decided to marry him and then move to Istanbul in 2012.

“I did not know who the Muslims were, or what they believed in. I did not know that we believed in the same prophets, either. As I was studying sign language interpretation, I started to research more about Islam thinking I may need to translate in a mosque one day,” she said.

Molendyk said that a new door of faith was opening to her and she started to walk to be a better person.

“I found out that Islam was the right way,” she said.

She added that while researching Islam, she realized that her lifestyle would change totally, which induced worry and fear in her. But her fears and many other questions were attended by a Muslim lecturer at a seminar. Just a day before, these questions were left unanswered by the priests.

“I wrote a letter to my husband, who was a friend then, telling him that I am converting to Islam. May Allah bless him, he came to visit me in my city. That day I became Muslim and wore a headscarf,” she said, adding that she had first decided not to wear a headscarf after conversion to maintain the culture she was living in.

Recalling the difficult period of her life with tears rolling on her cheeks, Jenny Molendyk said her elder brother approved and supported her even as her parents continued objecting to her decision.

“My father copied and sent me the things he found about Islam on websites. He wanted to tell me that is what you have chosen. He was upset. I understand him. But he did not know what Islam is. He only knew what he saw on the television. My mother was more scared. She was afraid that I would marry, never see my children, live in the basement, locked up and in the dark,” she said.

“Everybody was shocked. My instructors at the university summoned me to a private room and enquired what has happened to me,” she said.

She added that when her boss asked similar questions, she quit her job.

When she married Sami Divieli, who had been in Canada for education and work, only her brother attended the function. But after six months, when they held a ceremony in Istanbul, her mother attended.

“Our first child was born in Canada in 2008. We wanted our children to grow up in a Muslim country, speak two languages, and hear the azan,” she said.

About her husband’s family, she said they welcomed and treated her like a daughter. But there was a language barrier, they did not know English and she did not know Turkish.

But she said the life in Turkey was entirely different as in Canada everybody used to stare at her as she went out supporting a headscarf.

I came to Turkey, thinking I will not draw any attention. But it was not like that.

“Everyone understands that I am a foreigner. They feel curious and they ask me questions. I really love Istanbul and Turkey. We want to raise children who are happy with Islam, love Islam, and takes our Prophet as a role model,” she said.