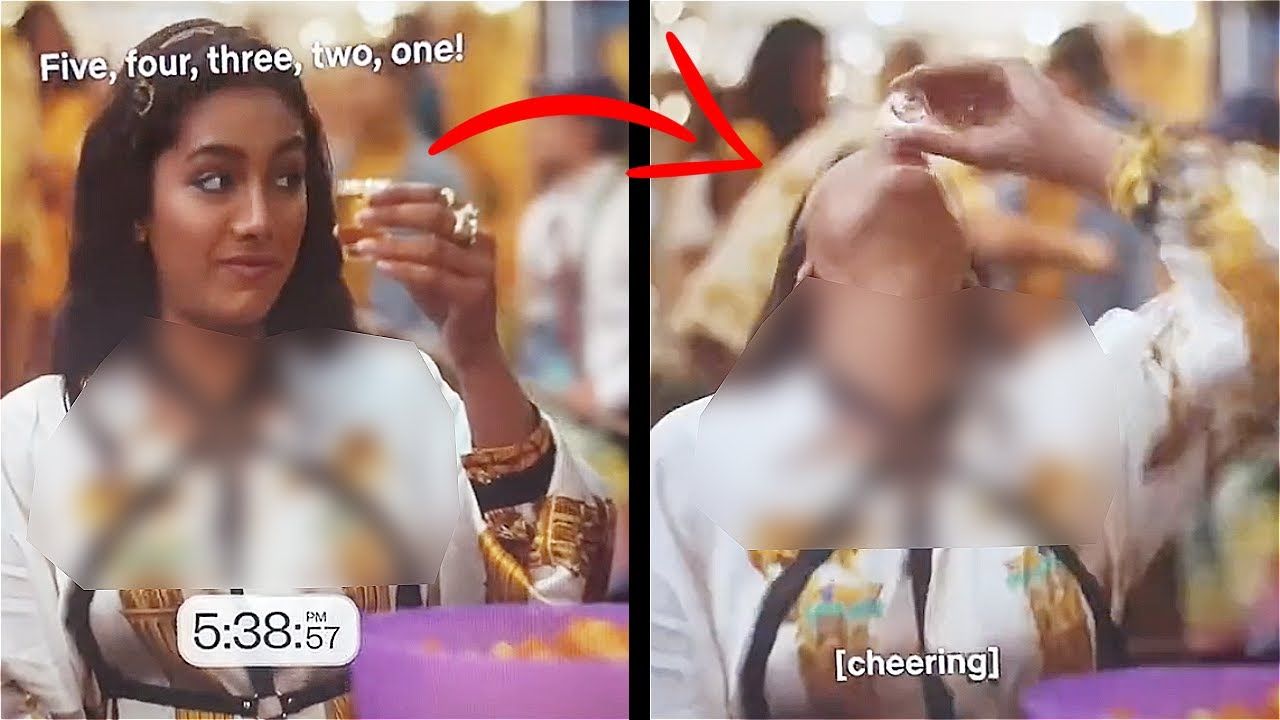 Yes this is allegedly a clip on a NetFlix show showing a Muslim woman breaking her fast with a shot of tequila while saying “BISMILLAH” which translates as “In The Name of ALLAH“.

Excuse me we do alcohol!

I don’t think you guys will be too surprised now because this is a trend that we’re seeing not only with Netflix but
pretty much every other show here are a few shows that are being presented to our children now they are suggestive even though your child has probably watched it, viewers, discretion is advised.

You know I’m saying like that is absolutely mental, let’s take this back to Muslims, yeah either we’re not being represented in the mainstream at all or we’re being represented as people who either are being oppressed by our religion or don’t follow our religion at all and it’s getting pretty obvious that the mainstream media loves the people that just aren’t practising or are willing to change their values I mean the example of people that don’t follow the religion at all, Maajid Nawaz, Sajid Javid, Saira Khan, DJ Khaled.

And these are the people that are gonna get the shows that are gonna get the promo the government contracts and the example of the others that start off from the grassroots yeah and that go in as decent Muslims and somehow end up changing their values such that they become exactly what the mainstream wants yeah you got the likes of Sadiq Khan, Guzzy Bear (Guz Khan) Ilhan Omar and the likes.

It goes against the values of the people in power be it materialism, consumerism, capitalism, adultery, Islam is against all of this so why on earth would they promote Islam so Islam promotes God Consciousness, it promotes speaking out against tyranny and it teaches us that death is not the end and not to be afraid of it and there is an everlasting life that we should aspire to not the life of this world so again, money, it acts as it yeah love of Dunya is the root of evil and mainstream media will continue showing Muslims doing silly things like this.

Because it is trying to normalize that sort of behaviour because TV does give that illusion of a majority and let’s face it we refer to it as a benchmark for our behaviour for our culture so it not only manufactures our consent for what the powerful want to do.

It’s been revealed that during the Iraq war the pentagon paid more than half a billion dollars to a British firm to spread fake al-Qaeda videos but it also manufactures our perception and understanding of culture and what’s normal as well this term manufacturing consent was coined by Noam Chomsky his book is definitely worth reading and the key is to keep repeating a lie till people believe it to be true.

Yeah! this is a technique that was done by the Nazis and now we know this term as Gobelian Propaganda

So what’s the solution am i just gonna sit here and tell you guys this is evil and stay away and look look i know i know
what’s practical yeah telling your kids not to watch this stuff is simply not practical, yeah but i will say be very cautious with what you watch because it is your diet yeah it does affect your mind and your daily actions.

Basically, I feel like your diet isn’t only what you eat it’s what you watch it’s what you read it’s what you listen to and so I’m mindful of what I ingest that being said it’s not always going to be practical for you to tell your kids don’t watch this and keep them away from that I mean we don’t use this mentality when it comes to other things when they go outside we tell them about stranger danger if you see somebody don’t take sweets from them don’t go towards them
we don’t say oh there’s evil outside just stay in and never go out yeah.

So likewise when you’re watching TV yeah especially these questionable programs if you do have to watch them with your kids and afterwards, you have to sit down for 5-10 minutes go over it tell your kids what propaganda tools were being used tell them and analyze don’t just walk away and let those ideas fester in their minds and go into their subconscious dissect it analyze it give them that time.

Newsletter Signup
In this article:Alcohol, ALLAH, Islam, Muslimah, Netflix
Up Next: